Elysium Basis Still May Not Be What You Hoped Elysium Basis took the world by storm in 2015. Founders Leonard Guarente, Dan Alminana, and Eric Marcotulli appeared to be soaring. It seemed as if everyone was talking about them and their business in 2016. That’s when I wrote my first Elysium supplement review.

Since that time, business dynamics have evolved. Science has continued to progress. Researchers have published new studies. And change brings an opportunity to reassess.

In my first review, I explained that Elysium Basis may not be what you think it is. Through smart marketing, Elysium Health had cultivated some exaggerated impressions:

And many consumers were persuaded to begin using Basis for cellular health, optimization of metabolic repair, and long term healthy aging.

But the truth is that Elysium was one of many vendors who purchased Nicotinamide Riboside from Chromadex. The science behind NR was promising but still preliminary. And NR supplements were readily available from other vendors on Amazon and elsewhere.

Since 2016, Elysium and Chromadex had a falling out. Here, to the best of my understanding, is the short version of the story:

Elysium has since tried and failed to challenge the legality of a Dartmouth patent, licensed to Chromadex. The patent describes what may be at present the only scalable method for manufacturing Nicotinamide Riboside. Chromadex is now suing Elysium for patent infringement. And there's also a flurry of other lawsuits going back and forth between the two parties in various states.

By 2016, aging research had provided hope that Nicotinamide Riboside could be an effective geroprotector.

In the body, NR is a precursor to nicotinamide adenine dinucleotide (NAD+). NAD+ levels decline with age. Preliminary evidence suggested that NR could boost NAD+ levels significantly better than other B3 vitamers such as nicotinic acid. And higher NAD+ levels could help with activating sirtuins, which may slow or reverse aging.

Unfortunately, however, there wasn't much evidence from human studies to provide formal support. There was only one study on one human. And there were plans for larger studies.

In 2017, researchers published a study of 8 persons who supplemented with Nicotinamide Riboside. Participants used 250 to 1000 mg daily for 9 days. The study found that supplements doubled NAD+ levels in blood samples.

Also in 2017, Elysium published a study of 120 persons who used the Basis NAD+ supplement. For the study, they used a formulation that contained Nicotinamide Riboside from Chromadex, before changing suppliers. Participants used 500 or 250mg of Nicotinamide Riboside and 100 or 50mg of Pterostilbene daily for 8 weeks. Like the other 2017 study, this study found that supplements increased NAD+ levels up to 90% in blood samples.

These research results are good news!

Of course there's more work to be done. It's one thing to measure an increase of a chemical in blood samples. It's another thing to confirm that the increase actually results in expected health benefits for humans.

But we'll see more studies that aim to do that. And I'm optimistic about the results.

In the meantime, Nicotinamide Riboside is still neither the most well-researched nor the most demonstrably effective geroprotector. Judging from the available science, there are others that are probably more worthy of your consideration.

So, before you invest in Nicotinamide Riboside, check out my list of top tier geroprotectors. It includes 22 nutrients that have a notable magnitude of effect on one or more parameters of healthy aging. And each of those effects have been demonstrated in multiple human studies that were peer reviewed and placebo controlled.

Along with Nicotinamide Riboside, Elysium Basis ingredients include Pterostilbene. It's a nutrient similar to Resveratrol, which is touted for general purpose geroprotection. And some researchers believe Pterostilbene may be more bioavailable than Resveratrol.

However, Pterostilbene is less well studied than Resveratrol. And it may present a downside that Resveratrol does not. That downside is the potential to increase LDL cholesterol -- the "bad" cholesterol.

That second study happens to be the same study that Elysium published to demonstrate the benefits of Nicotinamide Riboside. Again, the negative effects were small. And, as indicated in the first study, it may be possible to counteract them with supplements of grape seed extract. However, the effects were significant enough that Chromadex decided to stop supplying Pterostilbene to its customers.

Although my interest in Nicotinamide Riboside continues to grow, the Elysium Basis supplement still isn't the best investment of your budget. It doesn't include the most well-researched geroprotectors. It includes Pterostilbene, which may increase LDL cholesterol. And it includes Nicotinamide Riboside from an unknown supplier at a price that competitors easily beat.

In contrast, Thrivous has brought to market several premium quality supplements that provide the most well-researched geroprotectors at value prices:

Thrivous also sells a discounted combination of these products. It is Geroprotector Stack. And it includes Omega, Tenacity, and Vitality.

Thrivous publishes documents to support the science of each product. Each nutrient and each dose is backed by multiple human studies. You can download a summary of clinical trials from each product webpage.

Thrivous also submits each product to rigorous quality control. We test each nutrient multiple times to verify its identity, potency, and safety from microbes and heavy metals. And we transparently publish all information from our suppliers, manufacturing, and third-party test labs. You can download a certificate of analysis and quality from each product webpage.

If you're looking for the most advanced geroprotector supplements available on the market today, Thrivous is the smart choice. Buy yours today. 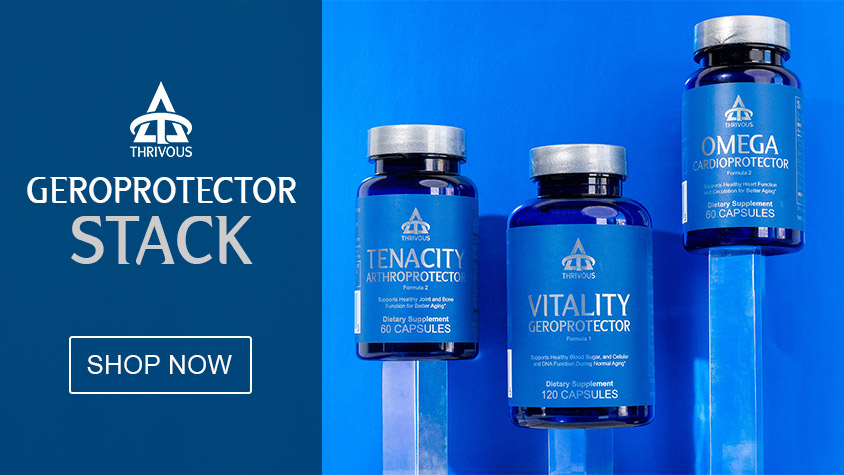 Read more articles at Thrivous, the human enhancement company. You can browse recent articles in Thrivous Views. See other Geroprotectors or Product Comparison articles. Or check out an article below.