Scientists have studied the interaction between Vitamin B supplements and Omega 3 fatty acids with respect to cognitive health. Cognitive health is defined by the National Institute on Aging as “the ability to clearly think, learn, and remember.”

Persons with elevated homocysteine levels tend to exhibit relatively poor cognitive performance. It has been suggested that Vitamin B supplements could lower homocysteine levels and thereby slow down cognitive decline. It has also been suggested that the efficacy of Vitamin B is dependent on Omega 3 fatty acid, becoming effective in individuals with higher Omega 3 plasma levels.

These suggestions, however, haven’t been unanimously accepted. And that motivated scientists to conduct a thorough study based on extensive data.

In a study published in European Journal of Nutrition, the scientists report the results of their investigation on whether the effect of Vitamin B on cognitive health depends on Omega 3 levels in cognitively healthy older adults. Rather than conducting a new trial, the scientists further analyzed data produced by the existing B-proof trial.

The B-proof (B-Vitamins for the Prevention of Osteoporotic Fractures) trial collected data between October 2008 and March 2013 in the Netherlands. It investigated the effect of Vitamins B9 and B12 on bone health. However, cognitive function was measured as a secondary outcome. And the data related to cognitive health have been further analyzed in this new study.

The cognitive health of the participants in the B-proof study was assessed twice. The first assessment was at the beginning of the study. And the second was after two years of intervention. Assessments included an extensive battery of cognitive tests, administered by trained research assistants.

For the new study, based on the B-proof data, the scientists further analyzed the effect of Vitamin B supplements on cognitive health as a function of Omega 3 levels. In particular, they looked at levels of eicosapentaenoic acid (EPA) and docosahexaenoic acid (DHA).

Thrivous develops its Clarity supplement to enhance brain function, and the Omega supplement to enhance cardiovascular function. Together in Thrivous Stack, they provide clinical doses of the most bioavailable forms of Vitamin B Complex and Omega 3, along with complementary science-backed nutrients to enhance cognitive performance and promote healthy longevity. As concluded by this study, the ingredients in Clarity and Omega can improve each other's effects when used together. 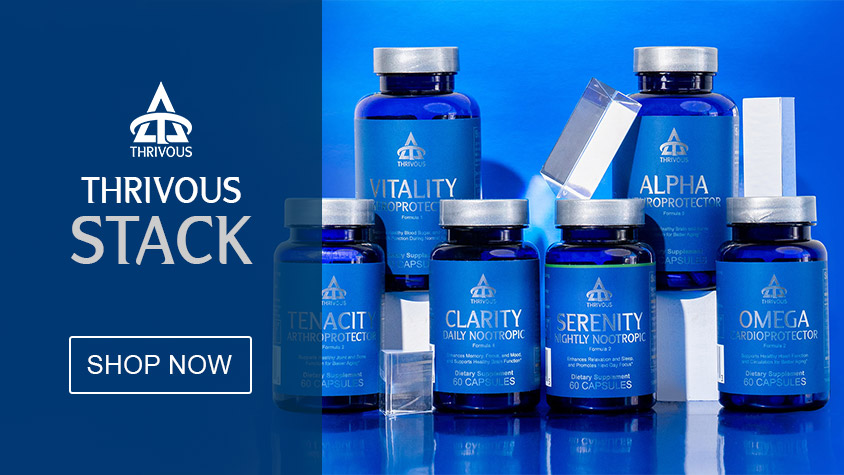